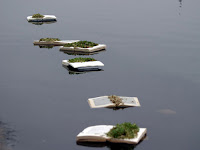 
Codex Seraphinianus
In 1978 a mysterious package arrived at the Franco Maria Ricci's Publishing House in Milano, Italy. It was "Codex Seraphinianus" - a lavishly illustrated manuscript written in a weirdest alphabet, not seen anywhere else. The illustrations were of bizarre animals and strange rituals, reminiscent of "Lucy in the Sky with Diamonds" psychedelics, married with Hieronymus Bosch. If you can read this book, you'll possess keys to parallel Universes, or so they say. According to Wikipedia, "the language of the codex has defied complete analysis by linguists for decades". At least we know that the title word "Seraphinianus" is the acronym for "Strange and Extraordinary Representations of Animals and Plants and Hellish Incarnations of Normal Items from the Annals of Naturalist/Unnaturalist Luigi Serafini".
Posted by PRINTANA at 11:27 AM