Coptic binding refers to methods of bookbinding developed by early Christians in Egypt, the Copts, and used from as early as the 2nd century AD to the 11th century.[1][2] The term is also used to describe modern bindings sewn in the same style. Approximately 120 original and complete Coptic bindings survive in the collections of museums and libraries,[3] though the remnants of as many as 500 Coptic bindings survive.[4][5]
Coptic bindings, the first true codices, are characterized by one or more sections of parchment, papyrus, or paper sewn through their folds, and (if more than one section) attached to each other with chain stitch linkings across the spine. In practice, the phrase "Coptic binding" usually refers to multi-section bindings, while single-section Coptic codices are often referred to as "Nag Hammadi bindings," after the 13 codices found in 1945 which exemplify the form.


More information on coptic binding by clicking here.
Variation of the above. 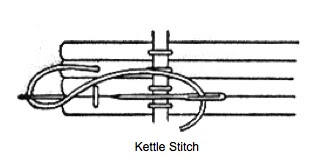