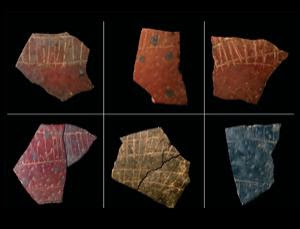 COULD these lines etched into 60,000-year-old ostrich eggshells (see photo) be the earliest signs of humans using graphic art to communicate?

Until recently, the first consistent evidence of symbolic communication came from the geometric shapes that appear alongside rock art all over the world, which date to 40,000 years ago (New Scientist, 20 February, p 30). Older finds, like the 75,000-year-old engraved ochre chunks from the Blombos cave in South Africa, have mostly been one-offs and difficult to tell apart from meaningless doodles.

The engraved ostrich eggshells may change that. Since 1999, Pierre-Jean Texier of the University of Bordeaux, France, and his colleagues have uncovered 270 fragments of shell at the Diepkloof Rock Shelter in the Western Cape, South Africa. CLICK HERE FOR FULL ARTICLE.